If you’re a diver, you’ll know that the waters off North Sulawesi hold some of the richest marine life in the world. But did you know Gangga Island is one of the best places in Indonesia to see mandarinfish?

What’s so Special About Mandarinfish? 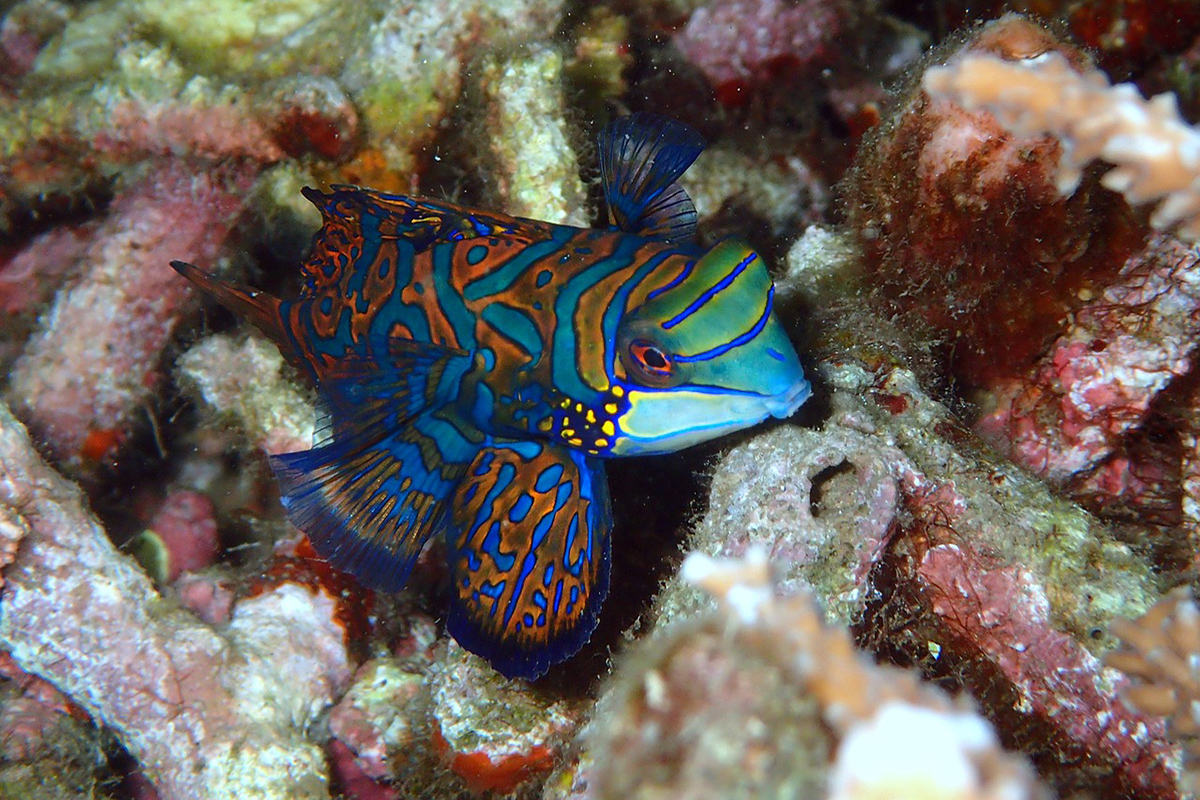 Mandarinfish are extremely beautiful, with a stunning colouring of mainly blue and orange, but also yellow, purple and green. Their name actually comes from their resemblance to the robes of a Chinese imperial officer, rich in colours and patterns. The species found around Gangga Island are sometimes even called Psychedelic mandarinfish because their colouring and markings are so wild.

Mandarinfish have an unusual shape, with a broad, depressed head and 4 dorsal spines and 8 dorsal soft rays makes them quite a sight. They also have large outward set eyes, which make it easier for them feed in dimly lit environments.

The way they swim is also incredible to watch. Their fins move quickly and gently like a cloth fan, giving them almost the look of a hummingbird gliding along.

Where Can We See Mandarinfish? 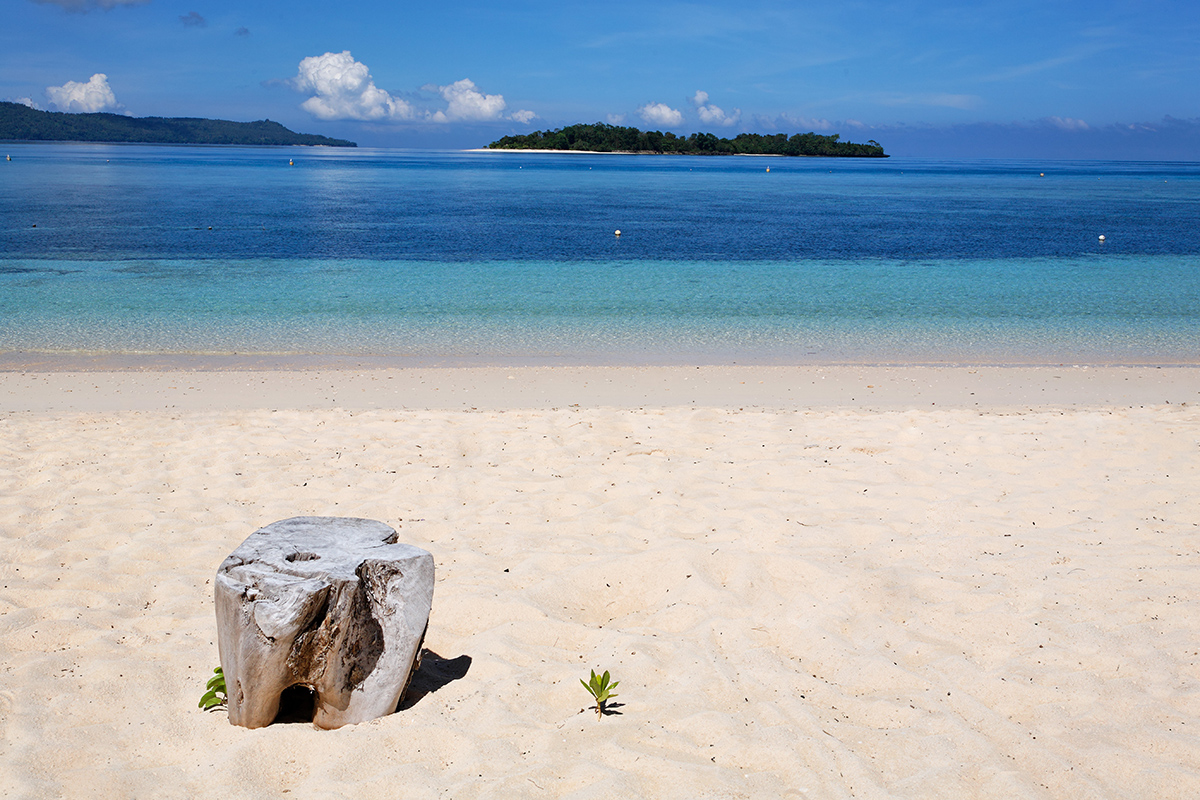 Mandarinfish are bottom dwellers, living on the seabed at up to around 18 metres deep. They are reclusive during the day so are much more likely to be seen during night dives. Once in a while you might catch a glimpse of one hopping between coral during the day, but this is rare.

Gangga Island Resort offers your best chance to see mandarinfish with an evening excursion to nearby Lihaga Island where they tend to congregate and mate. This tour arrives at Lihaga just around 5.30pm when the sun is beginning to set. Once you’re under the water you’ll see the fish starting to come out of their hiding places to find potential mates. 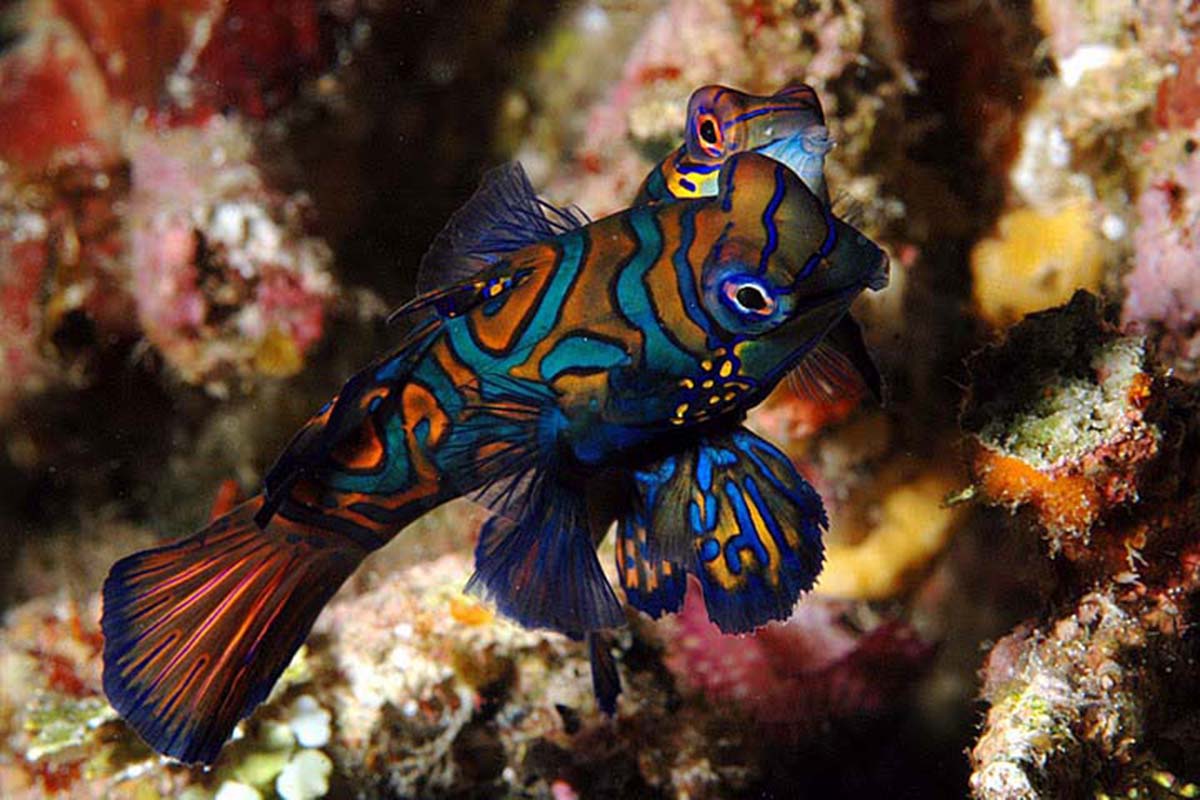 As the sun sets a few females begin to gather in a particular parts of the reef where the males like to hang out and show off. The males of this species are larger than the females and can be aggressive with other males when there are females involved.
The males swim back and forth, erecting their first dorsal fin and flashing their bright colours. Like miniature marine peacocks the larger, brighter and pushier they are, the more likely they are to end up with a mate.

If they are chosen by one of the females, the female will come to rest on his pelvic fin. The male and female mandarinfish will align themselves belly-to-belly and together, slowly rise about 1 metre above the reef. There, they will release sperm and a cloud of eggs and then instantly part ways.

Males often try their luck at a few different meeting points around the reef. If they get really lucky, they’ll be chosen multiple times in one evening. However, for the smaller, weaker males they often don’t get so lucky. Because of this they have developed a rather desperate measure. Don’t be shocked if you see a smaller male rushing up to a mating pair and releasing sperm with the hope of random fertilization. A little perverse maybe, but you can’t say it’s not creative.

It’s not often you get a chance to bear witness to mating rituals such as this one. The uniqueness of the mandarinfish’s looks and behavior makes this trip a must-do while staying at Gangga Island Resort. And don’t worry, this ritual occurs year-round so you can see it no matter what time of year you visit the resort.