Did you know that there are over 50,000 species of crustaceans? This encompasses crabs, lobsters, shrimp, crayfish, krill, barnacles, mantis shrimp and plenty more. While you’re diving around Manado you should definitely be keeping an eye out for crustaceans, but especially the tiny but spectacular shrimps that are so plentiful in the region. Here are just a few types of shrimp that should be on your list to spot starting with the most well known of them all. 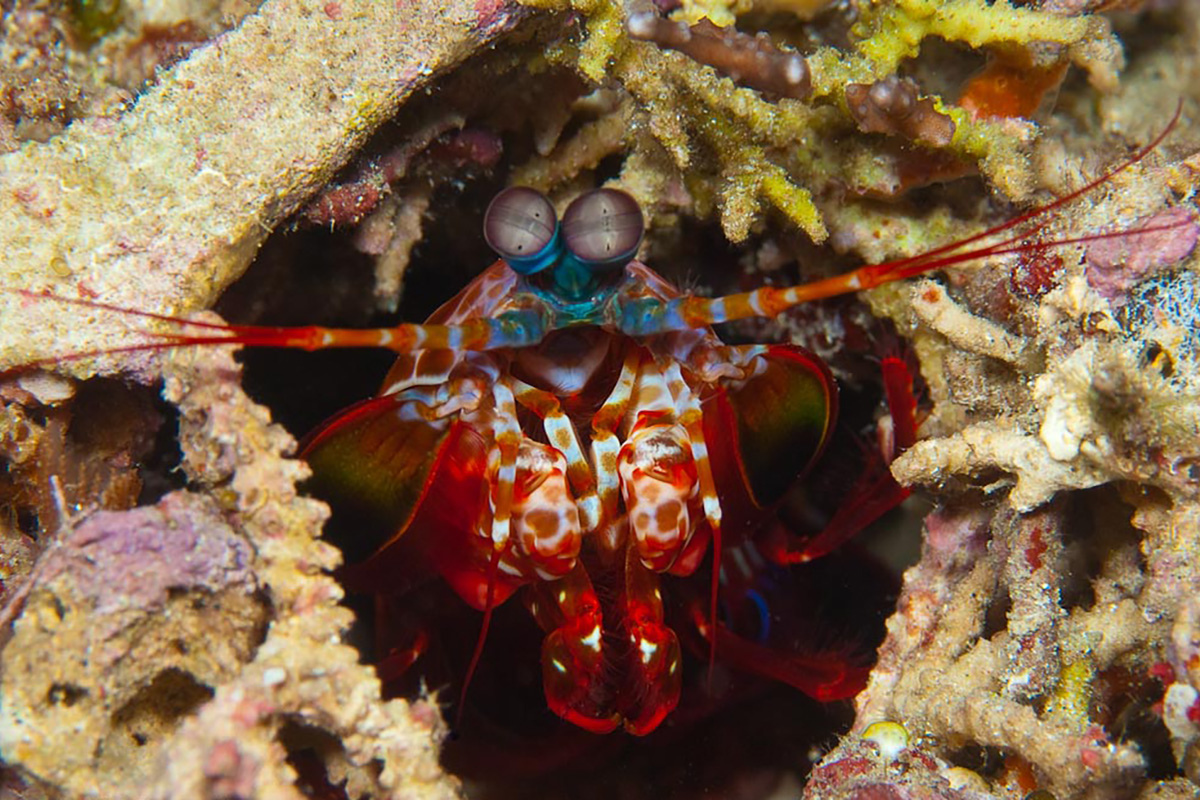 Mantis shrimp not only look beautiful, they have some pretty amazing super powers as well. Its spring-loaded arms can swing at up to 23 metres per second and deliver the force of a .22 caliber bullet being fired from a pistol. This small but mighty crustacean can be seen at most dive sites around Gangga Island and Manado. 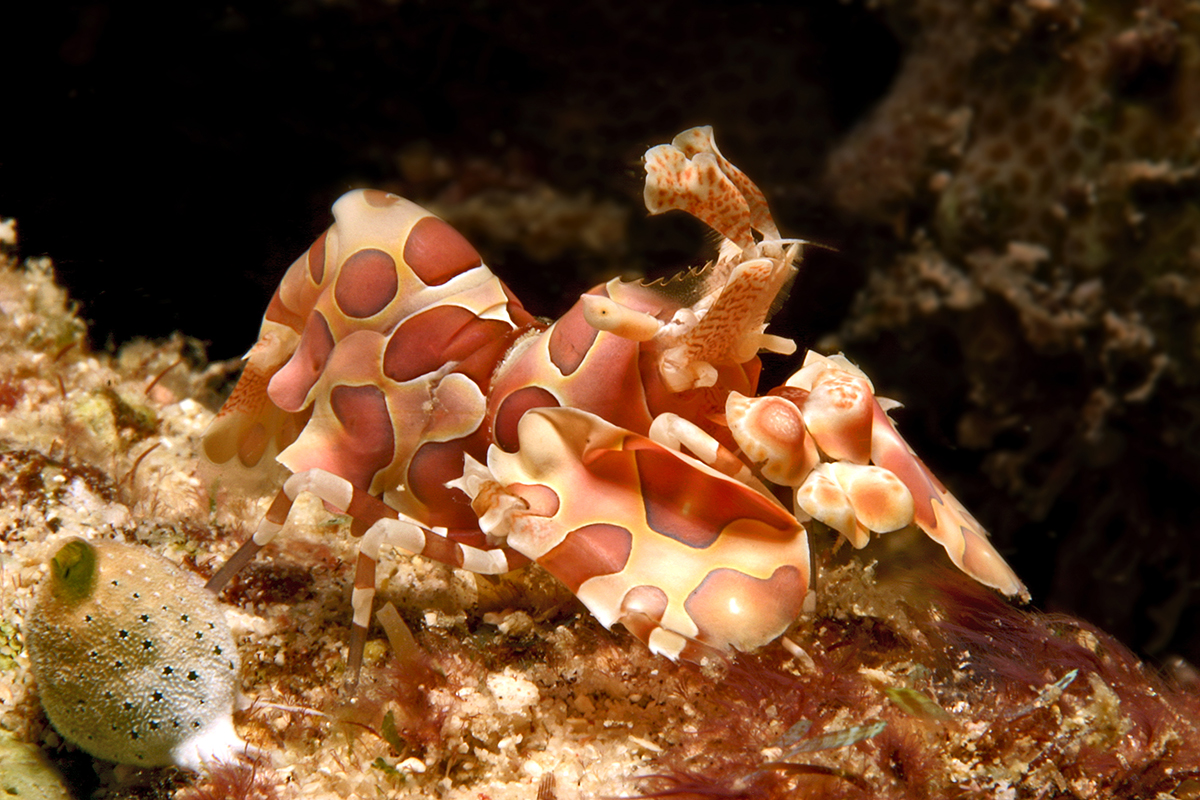 One of the most beautiful crustaceans you can find around Manado is the harlequin shrimp. Their brown to purple markings outlined in blue are especially striking against their white bodies. Add to this banded blue and white legs and you have quite an incredible critter to photograph. These shrimp feed on blue sea stars but don’t like to go looking for them. They generally stay hidden under a strategic rock waiting for their pray. 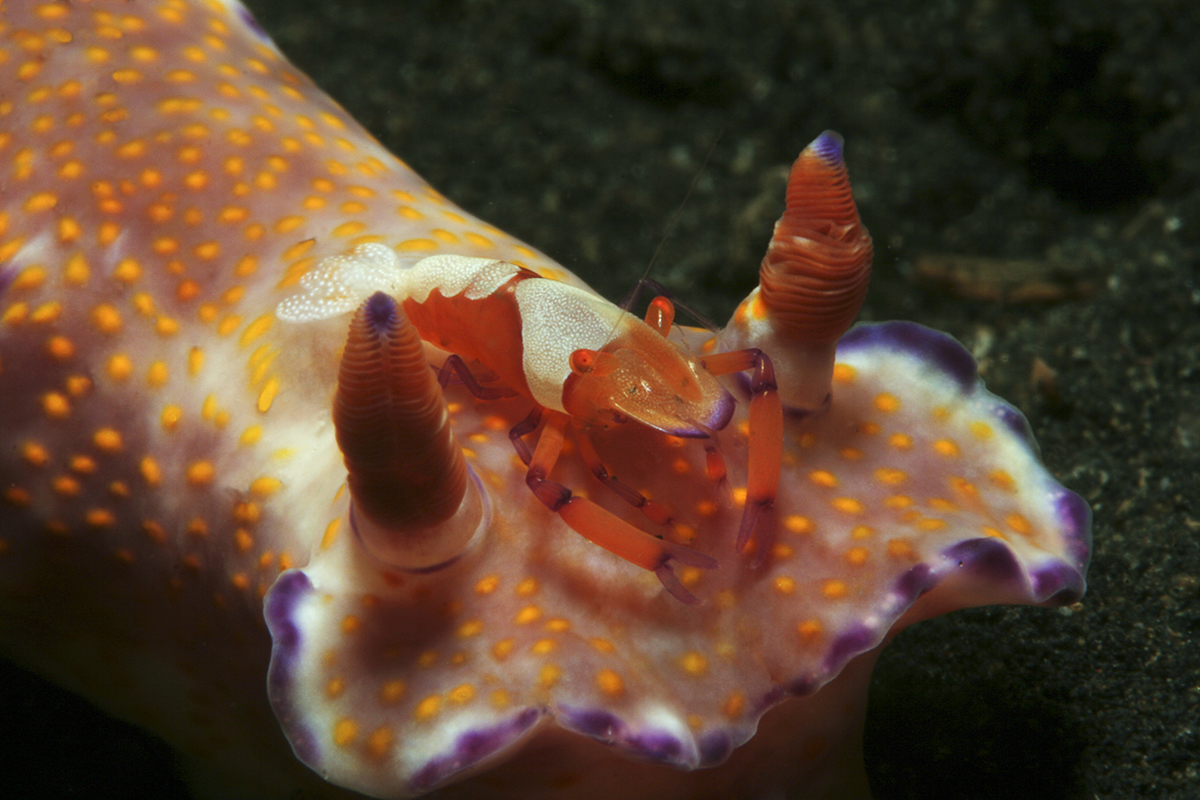 The emperor shrimp grows only up to around 2cm, which means you need a good macro lens to photograph. Once you have one in your sights you recognize their distinctive red colour with white patterns on its head, back, and tail. It also has orange claw arms with purple joints and claws. These are really interesting critters that have a symbiotic relationship with sea cumbers and some nudibranchs. The shrimp lives on the host and is protected while the shrimp eats the parasites off the host’s skin.

Also known as Saron shrimp, is a cleaner shrimp found in coral and rubble. They feed on algae, plankton, and parasites and grow to around 6cm in length. The colouration of this shrimp is variable but generally spectacular. They can be anywhere from transparent to cream with a marbled-looking red to brown pattern on the body and banded white legs. There is a lot going on!

The dragon shrimp is a really interesting critter with both camouflage and carapace spines as protection from predators. When you see this shrimp up close you might even second guess it being a shrimp at all. You are most likely to see these shrimp at dive sites around Lembeh and you should be looking for them on darker corals and sea whips. 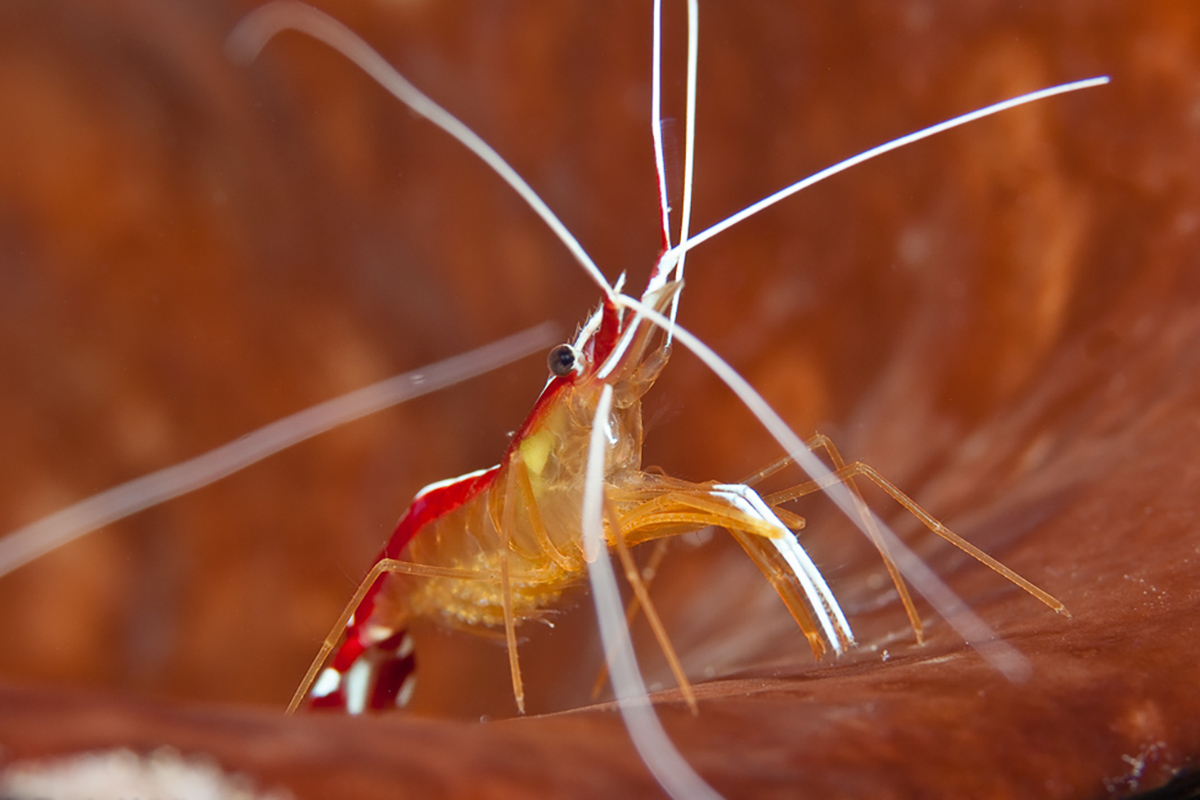 The name broken back shrimp refers to the family Hippolytidae, which consists of a large number of species. Like the dragon shrimp, these are cleaner shrimp that have even been known to clean the mouths of divers! Although they come in a wide variety of colours and patterns, they can be distinguished as broken backs thanks to the distinctive kink in their bodies. Keep an eye out for the squat shrimp (also known as the sexy shrimp), and the hairy shrimp that looks like filaments of green algae around Gangga, Lembeh and Manado.

You might have to have an eagle eye, but spotting shrimp around Gangga Island and Manado is almost a sport. Make sure to have your macro lenses ready and get ticking species off your list. You may even find some that are as yet unnamed. Let us know in the comments below if you are a shrimp enthusiast. We love to hear about all the species you’ve spotted!