The reefs around Gangga Island, North Sulawesi are known for being some of the most impressively diverse in the world. Divers come from all over the world to witness the beauty of the region and many people rely on divers for their livelihood. So what happens when something threatens the health of the reefs? The Crown of Thorns starfish is known as the enemy of coral reefs and we’re going to discuss why.

What is a Crown of Thorns Starfish? 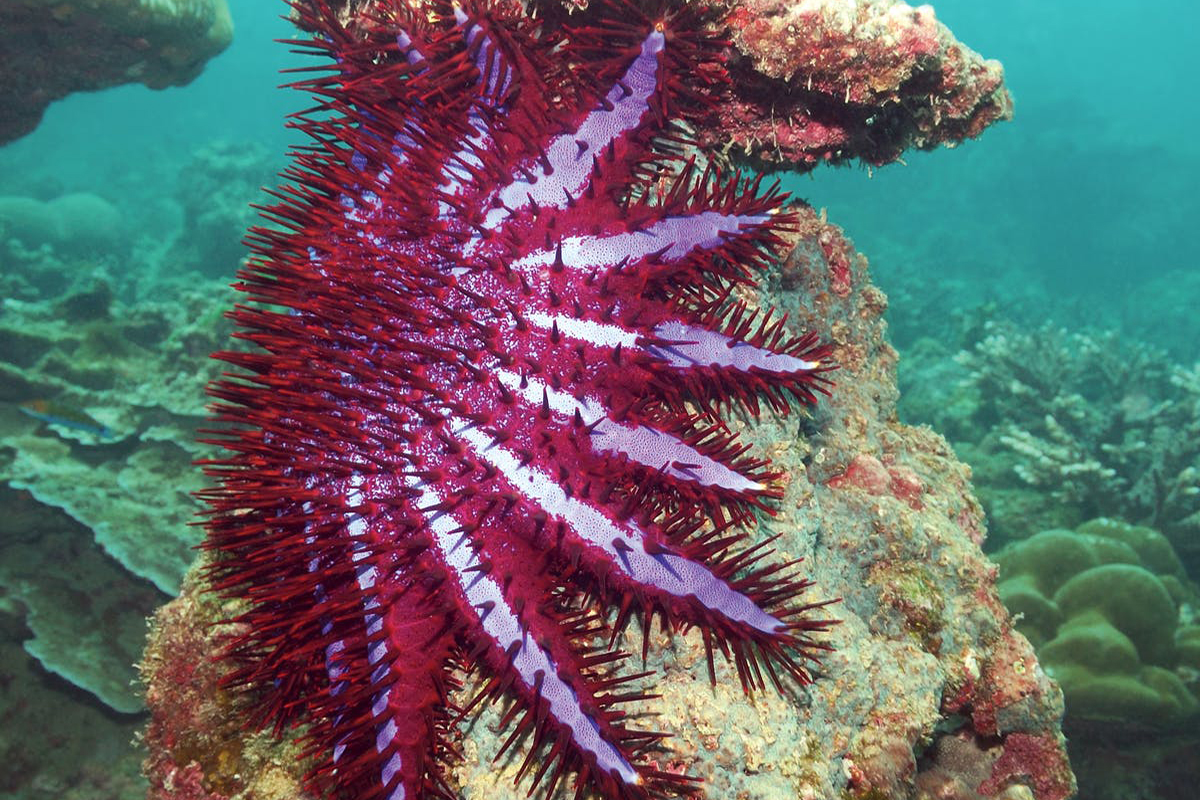 Crown of thorns starfish (COTS) are corallivores, or an animal that feeds on coral polyps. COTS are covered in long poisonous spines and are usually around 25-35 centimetres in diameter that resemble a biblical crown of thorns. They feed on just about any type of coral and can be found all over the Indo-Pacific region, from the Red Sea and coastal East Africa, across the Pacific and Indian Oceans, to the west coast of Central America.

To feed COTS climb onto living coral. Thanks to its flexible body it fits closely to the surface of the coral, even branching corals with their irregular shapes. Like many other starfish, it then extrudes its stomach out through its mouth and secretes digestive enzymes that allow the starfish to absorb nutrients from the liquefied coral tissue. The coral is stripped of its polyps leaving only the white coral skeleton.

A single COTS can consume coral at up to 6 square metres per year. This can have devastating effects on whole marine ecosystems. During an outbreak of COTS hundreds, or even thousands of COTS can wipe out whole coral reefs. 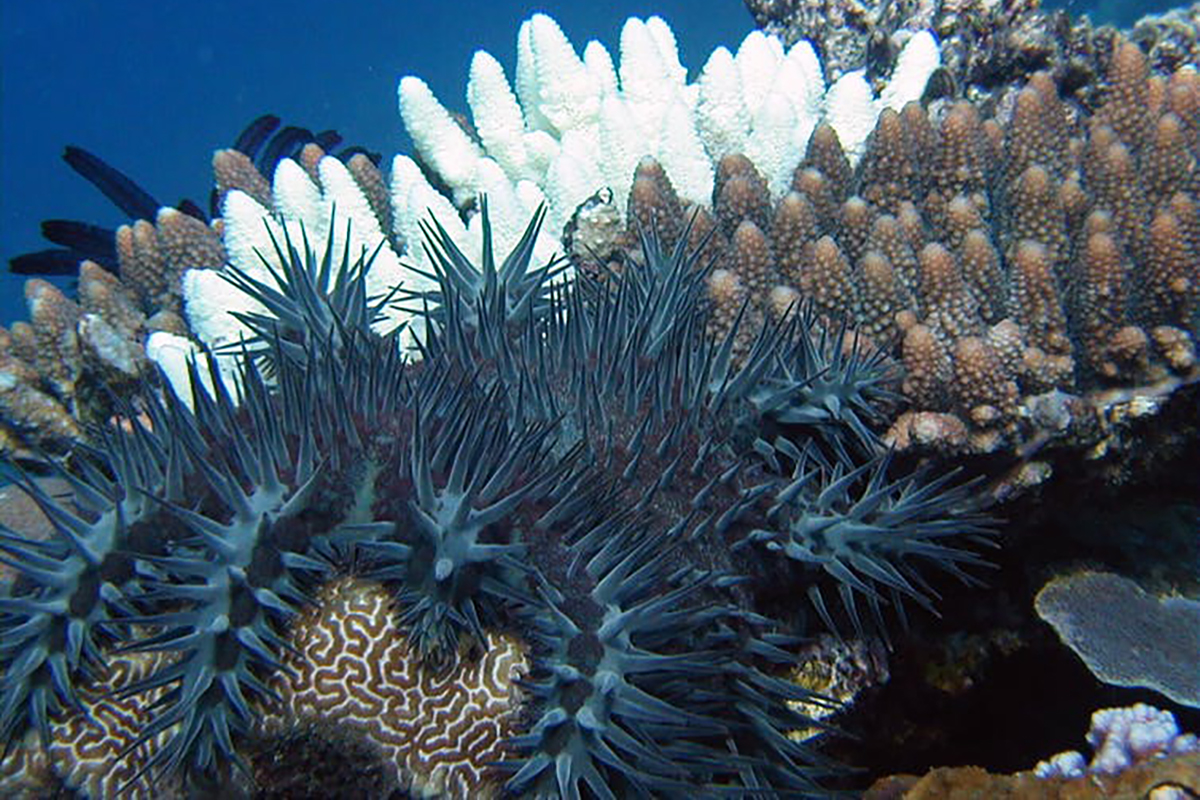 Currently around Gangga Island there is no problem with COTS but past outbreaks have been challenging. During one outbreak in the region Gangga Island Resort & Spa staff claimed to have gathered up to 6000 COTS!

This isn’t to say the reefs can’t survive a COTS outbreak. In fact many reefs come back stronger and more diverse than before. The problem arises when corals don’t have time to replenish and grow before another outbreak.

Around the Togian Islands of Central Sulawesi COTS outbreaks have long been a problem. In the past up to 80% of the reefs here have been destroyed in serious outbreaks of COTS. This is probably due to the overfishing of Napoleon wrasse and triton shells, the main predators of the crown of thorns. Thankfully in North Sulawesi the problem is not this extreme.

Crown of Thorns starfish are a perfect example of what can go wrong when the balance of predator and prey are uneven. Reef ecosystems are delicate and can suffer badly when there aren’t enough natural predators to keep corallivores in check. 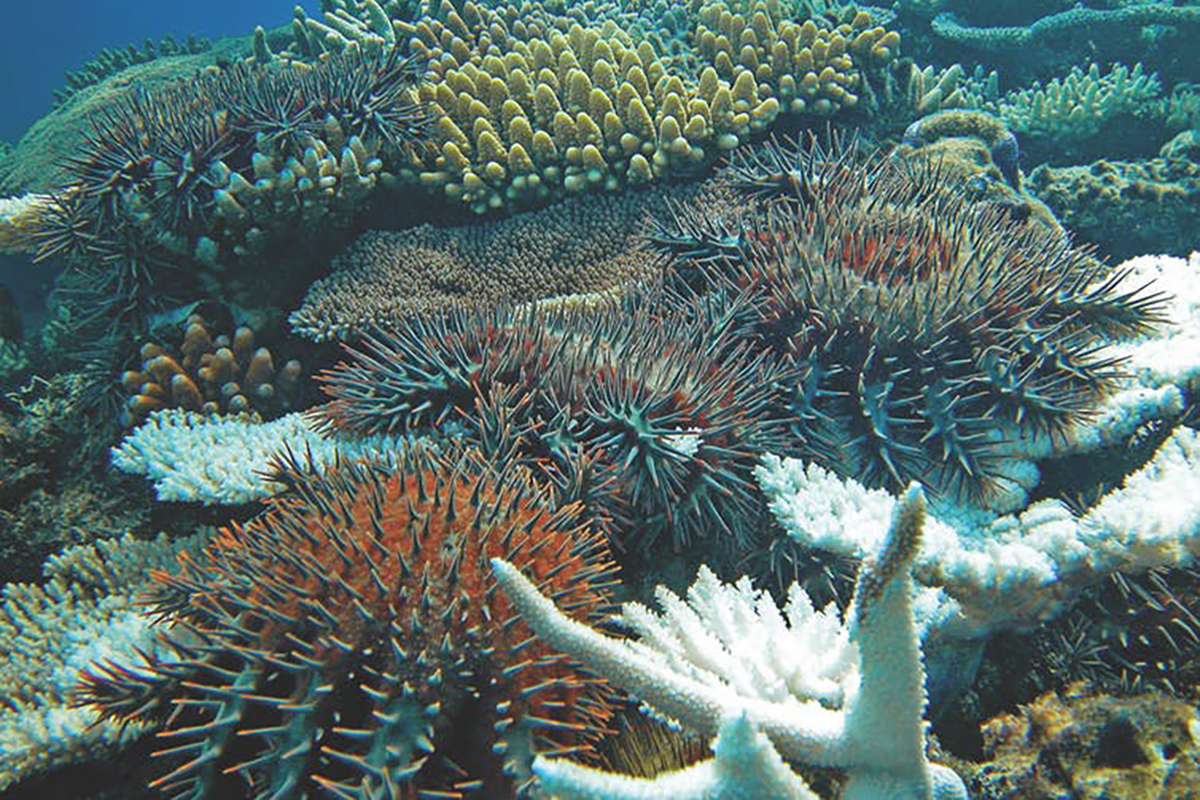 There is no real way of predicting when a COTS outbreak will happen but when it does there are ways of slowing the progress. Divers collect the starfish using tongs and nets. Taking them ashore, they are destroyed and disposed of away from the water. Underwater fences are also sometimes used to control the spread of COTS.

Have you come across Crown of Thorns starfish on any dives? We’d love to hear about your experiences, especially if you’ve ever joined a COTS cleanup. Leave us a comment in the box below!