North Sulawesi is an absolute wonderland for marine species, and this includes 8 species of hippocampus, or seahorses. Even more spectacularly, 4 of the 8 species are pygmy seahorses, which are magical to spot. The dive guides at Gangga Divers at Gangga Island Resort & Spa know the area well and will take you to the sites you are most likely to find these wonderful creatures. Let’s talk about what species of seahorses you’ll find in North Sulawesi and where you should be diving for your best chance at spotting them.

The common seahorse or Hippocampus taeniopterus is found mainly around the Manado area, just around 20 minutes from Gangga Island Resort & Spa. They are one of the largest species found in North Sulawesi growing up to 22cm in length. Common seahorses are generally brown and black but females can sometimes have a yellower tint. They have a smooth crown and spend most of their time in seagrasses where taking photos can be difficult but the results can be spectacular. 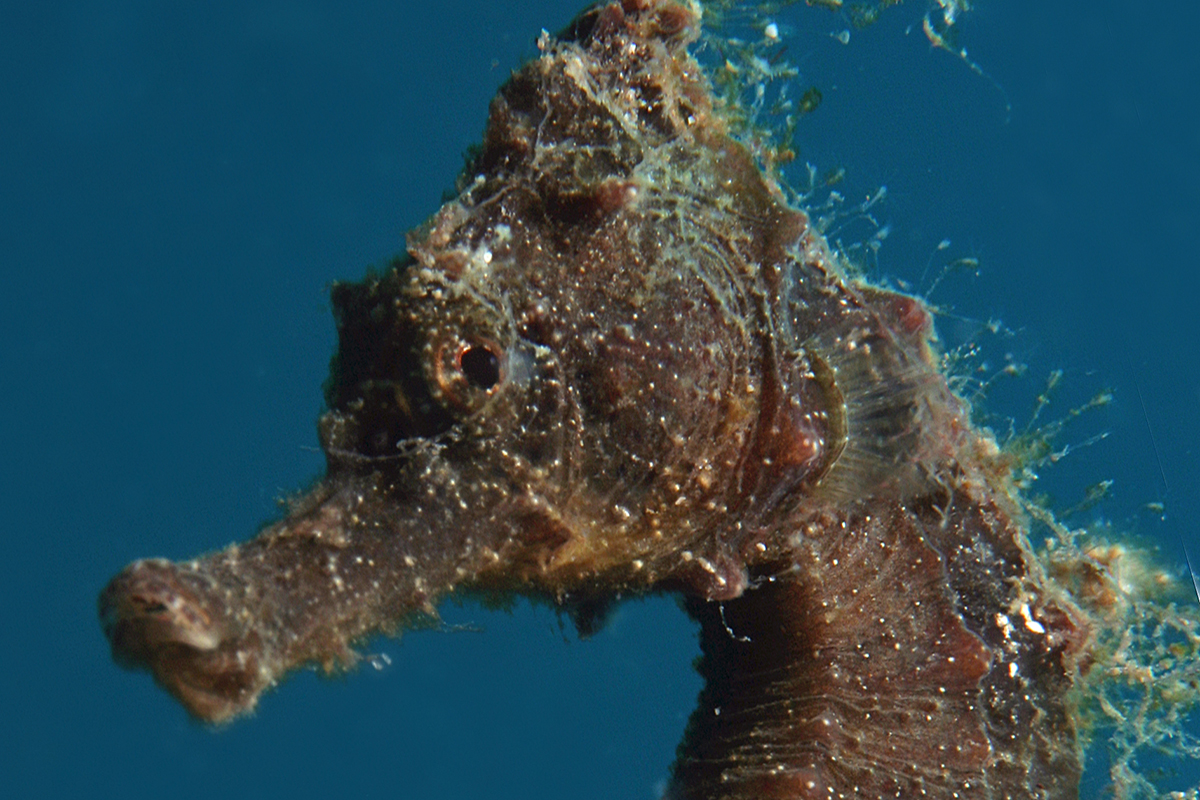 The Moluccan seahorse or Hippocampus moluccensis, is found in Maluku as it’s name suggests, but also in the Lembeh strait. It’s generally found in waters less than 20 metres deep amongst soft corals. It’s a bit smaller than the common seahorse at around 16cm long and varies a bit more in colour. Browns, purples, reds, oranges and yellows are all quite common. However, they are easily spotted by the white saddles on their necks and backs and striations around their eyes. 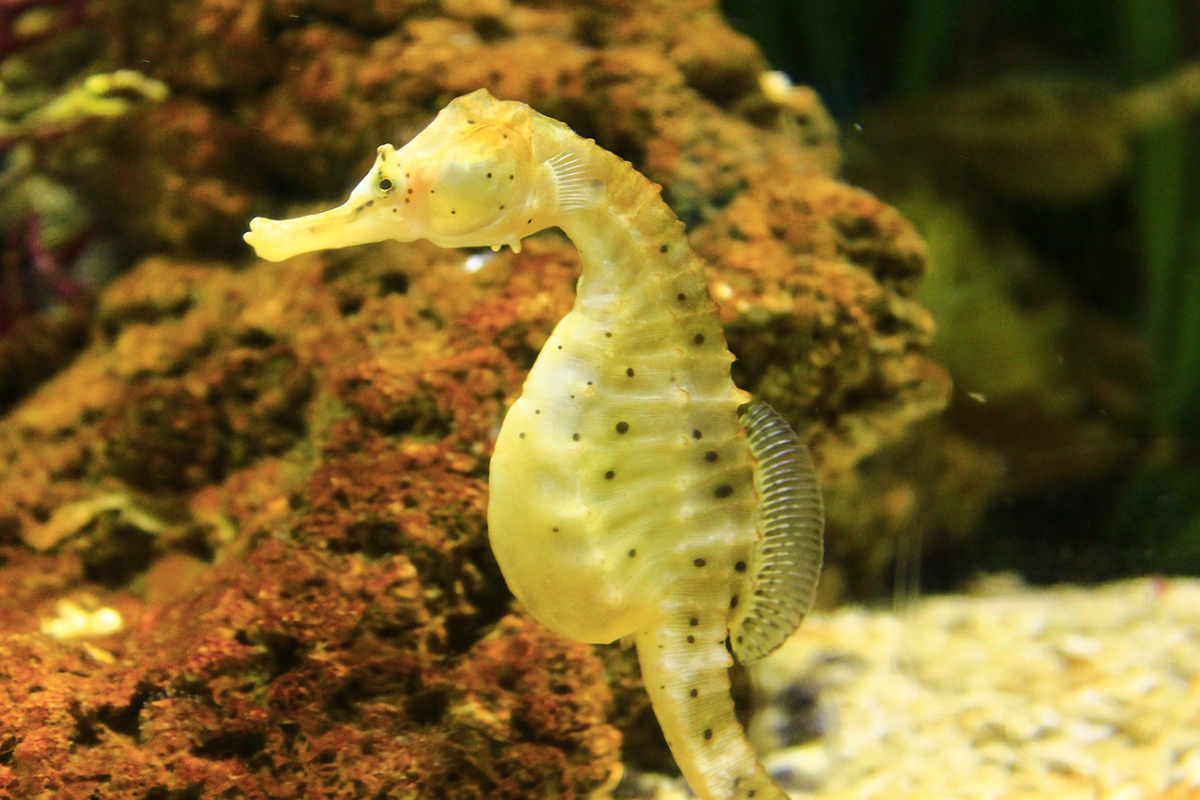 Estuary seahorses are also found in the Lembeh Strait. Scientifically known as Hippocampus kuda or Hippocampus fuscus, this seahorse species is quite common in Indonesia. They have quite a large head in comparison to their body and a short snout covered with long filaments. This is another species found in Lembeh – it is easy to recognise by the long filaments on its crown and snout. This seahorse also has a black band on its dorsal fin. We usually find the Eastuary seahorse in depths of less than 10 meters and it grows to around 15cm.

One of the most easily recognized seahorses in North Sulawesi, Hippocampus hystrix has spines protruding from its head and body. These seahorses are generally around 15cm long and range from red to green, brown and yellow. It often has gold speckles that also make it easier to spot. Thorny seahorses like to live in coastal reefs with plenty of soft corals and fans. 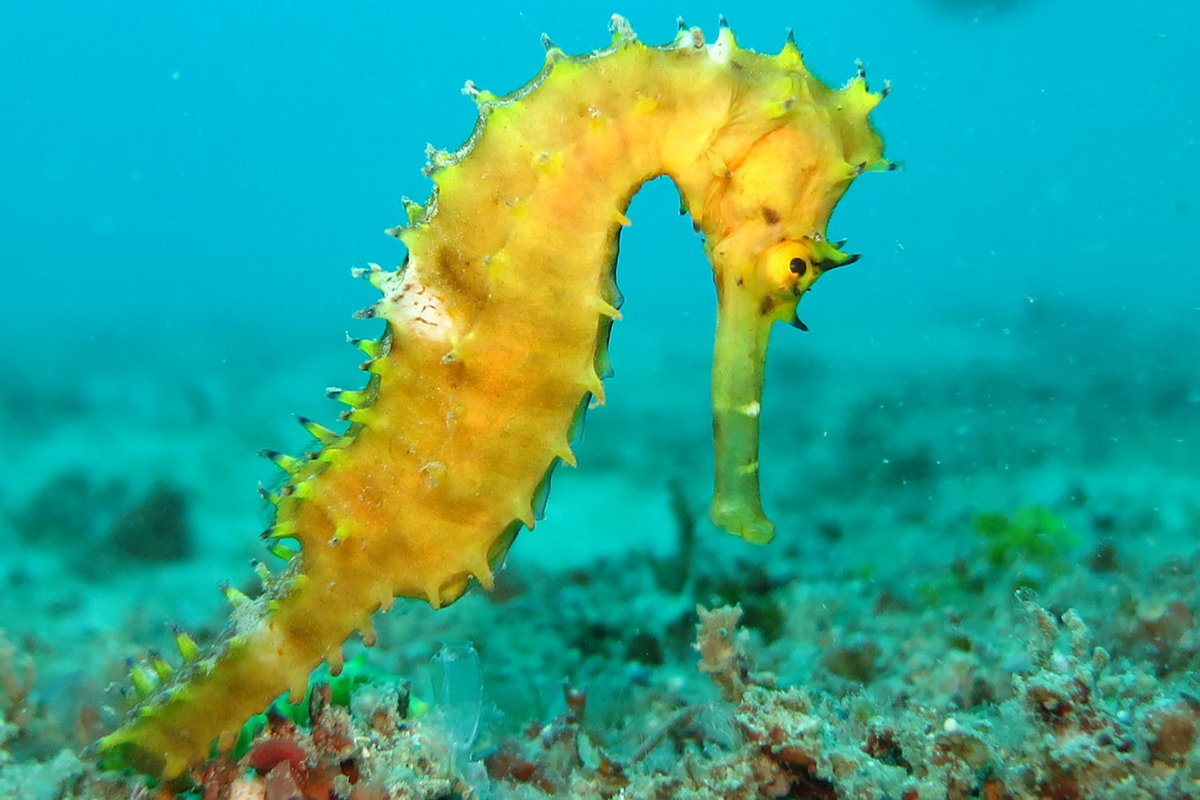 Pygmy seahorses are favorites of underwater photographers. These macro species make for very impressive photographs if you are lucky enough to be able to find and catch them on camera. Luckily the dive sites around Gangga Island offer lots of opportunities.

This 2cm seahorse was the very first to be discovered! Usually pinkish with darker spots, they can be extremely difficult to spot amongst the sea fans they live in and feed on. Surprisingly this tiny creature can be found at depths of up to 40 metres and are often found in groups in a single fan. 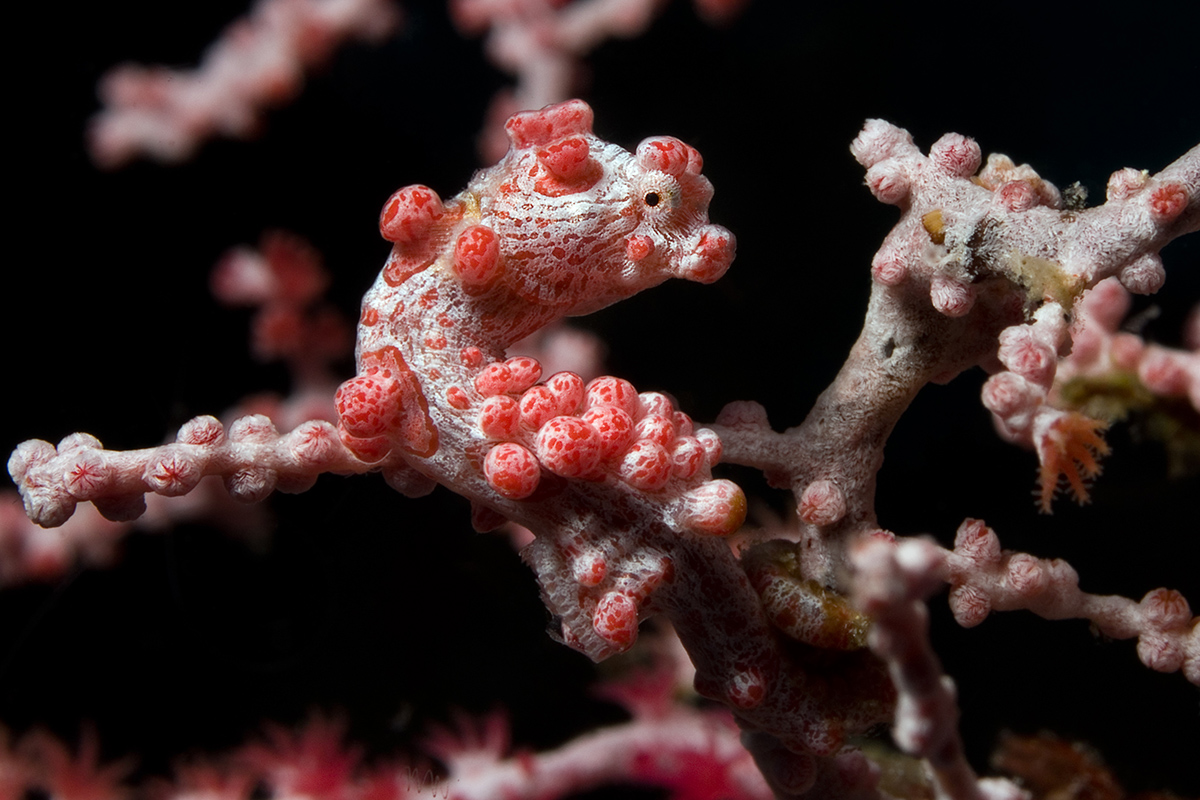 If you can believe it Hippocampus denise or Denise’s Pygmy Seahorse is even tinier than the Bargibanti. It is a smooth skinned seahorse that reaches only 1.5cm long! They have been found in water up to 70 metres deep hanging on to gorgonian sea fans. They hang on with their tales and can be photographed quite easily…if you have the eagle eyes to spot them. 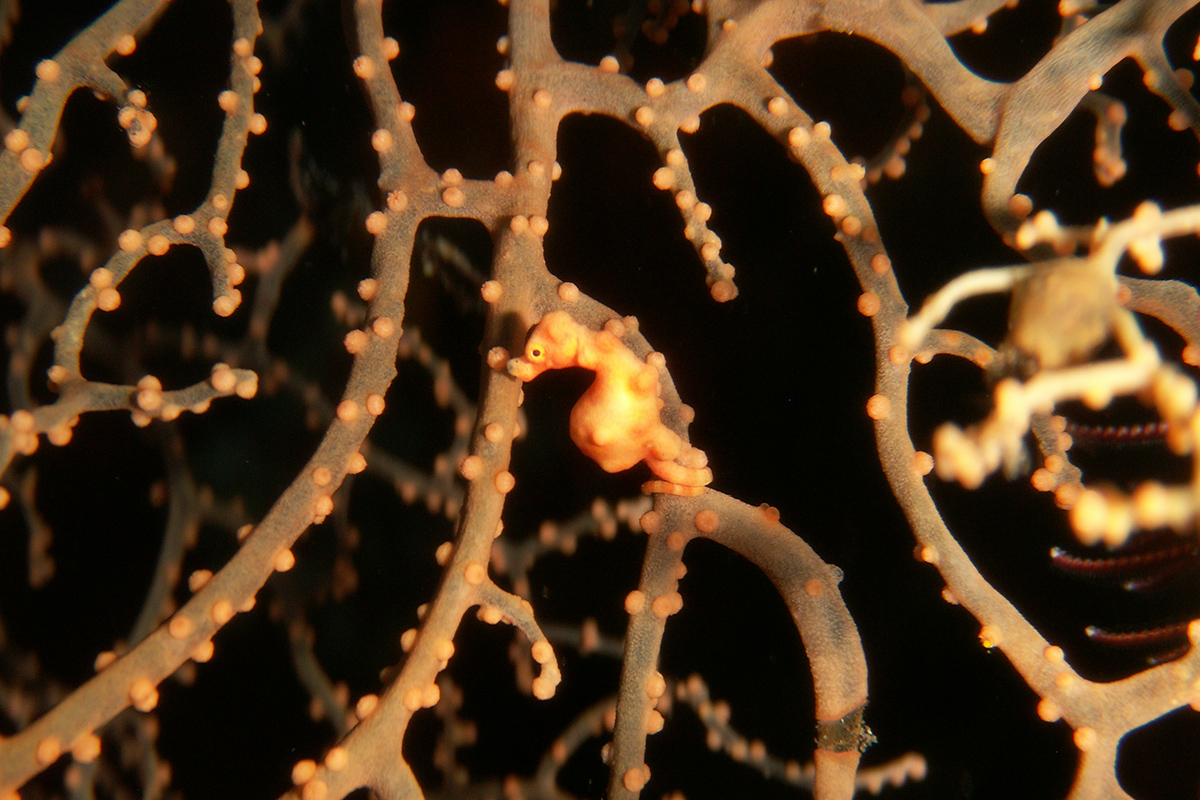 Getting even smaller, the Pontohi seahorse is only 1cm long. Unlike many other seahorses, Hippocampus pontohi likes to move around, which makes it even more difficult to spot and even more rewarding. Along with the size, its white body and red hair-like strands coming from its body give it away. It also usually has a yellow or orange crown. 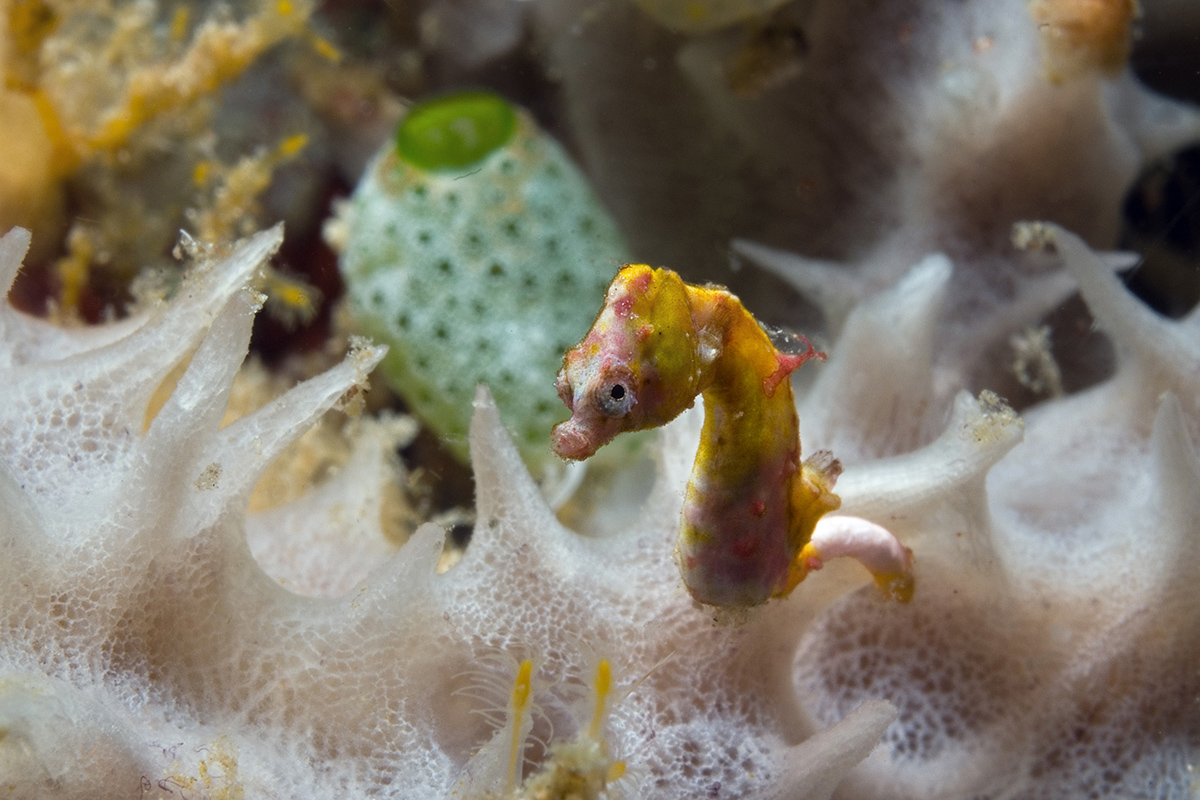 Not 100% confirmed as a separate species to H. Pontohi, Severn’s pygmy seahorse could be the dark colour variation of the pontohi. It is the smallest of the pygmy seahorses in North Sulawesi at an astounding 0.5cm, although this could be because it’s the juvenile stage pontohi. It can be found around Bangka but you really have to have your eyes peeled as its dark colouration blends perfectly with black coral, algae and weeds found at the dive sites here.

Would you like to see these 8 magnificent species of seahorses? We find them fascinating don’t you? Leave us a comment below about any seahorse encounters you’ve had while diving.