Would you believe us if we told you that the wonderpus octopus’ latin name is Wunderpus photogenicus? You probably would if you had ever seen this creature while diving. This fantastic octopus was only officially recognized as a species in 2006 and is now one of the most sought after sightings in North Sulawesi. It can be found around Gangga Island Resort & Spa, although it can take some patience to spot. However, if you are lucky enough to see one and even photograph it, this will be a sighting you’ll never forget.

What’s so Special about the Wonderpus? 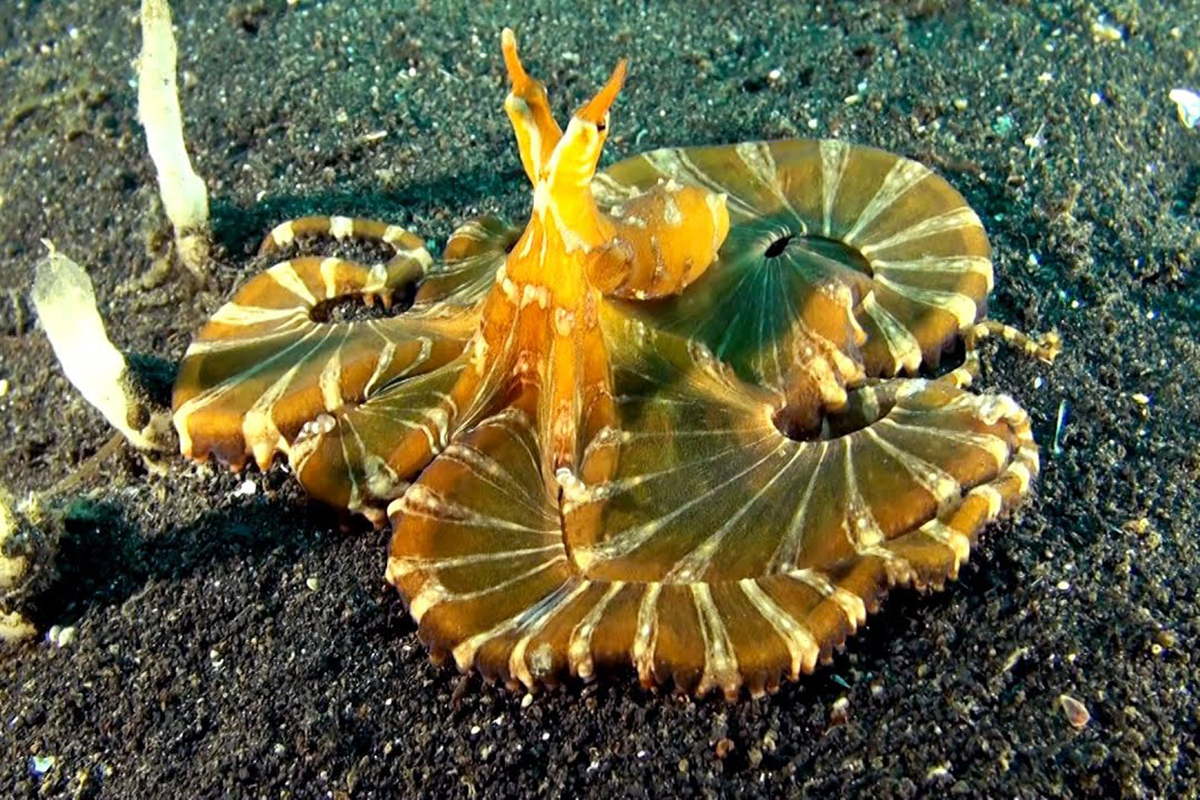 The wonderpus has an incredible ability to camouflage itself in sand and rubble whilst gliding along the seafloor. It doesn’t change colour or patterns, but can change the intensity of its colours to blend in with its surroundings better.

It uses this skill to wait for or creep up on its prey. It then covers the animal in an umbrella type maneuver with its body and uses an arm to push the meal into its mouth.

It is also thought that the markings of the wonderpus resemble dangerous sea creatures like banded sea snakes and the deadly lionfish.

The wonderpus has a lengthy reach and has been observed poking its arms into burrows and holes to find prey. If threatened it can purposefully drop parts of its arms to escape or distract predators. The arms later regenerate. 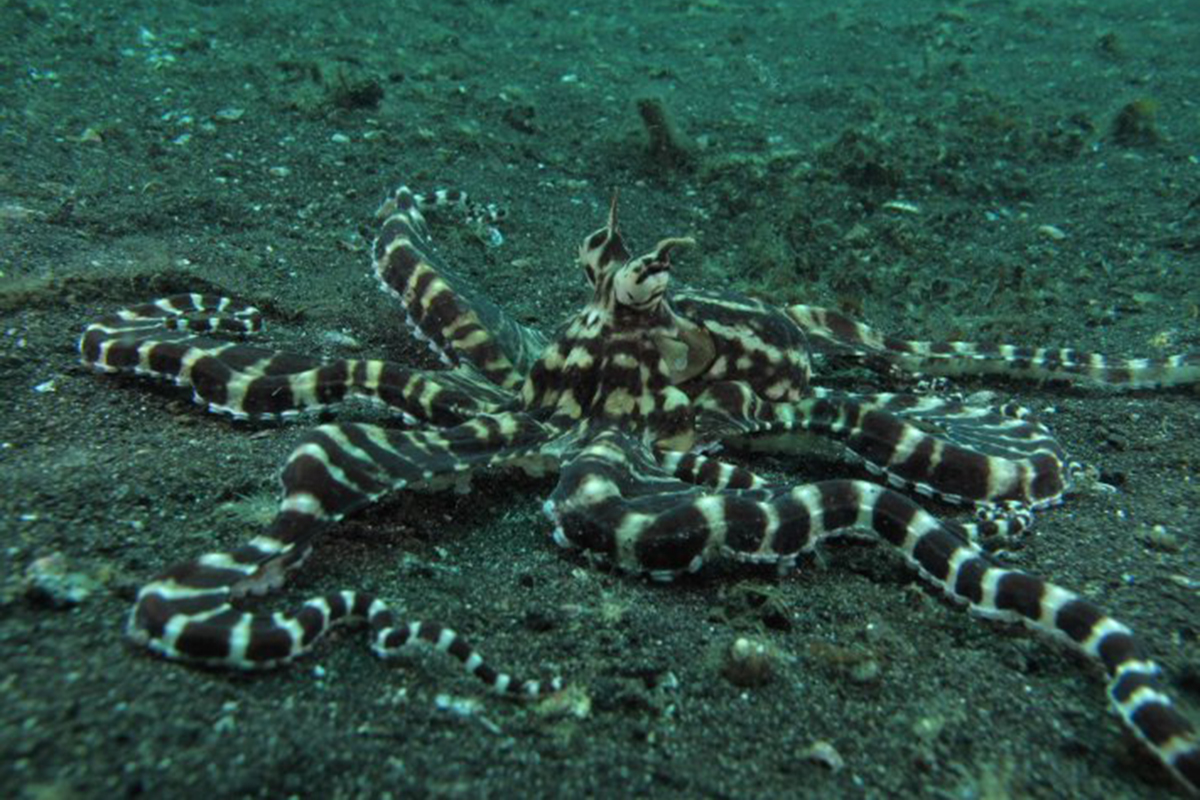 The wonderpus is often mistaken for another cephalopod also found in North Sulawesi. The wonderpus and the similar looking mimic octopus do have similarities, but once you know what to look for it’s quite easy to identify them.

The Wonderpus’ stripes have sharp borders and run all the way to their suckers. On the mimic octopus the markings are fuzzier and their arms are bordered in white. The wonderpus also has brownish suckers whereas the mimic’s are white.

The colouring of these 2 species is also quite distinctive, although it can be difficult to see while they are camouflaged. The wonderpus is a more reddish-brown, while the mimic octopus is lighter brown and has larger areas of white.

Looking at their eyes you will notice a significant difference. The wonderpus has elongated v-shaped eyes on stalks with pulsating colours. The mimic octopus’ eyes are straight and on short round stalks.

However, the most significant difference is the behavior of the 2 species. The mimic octopus has been observed changing shape to mimic different animals. The wonderpus does not change the shape of its body.

Where to find the Wonderpus 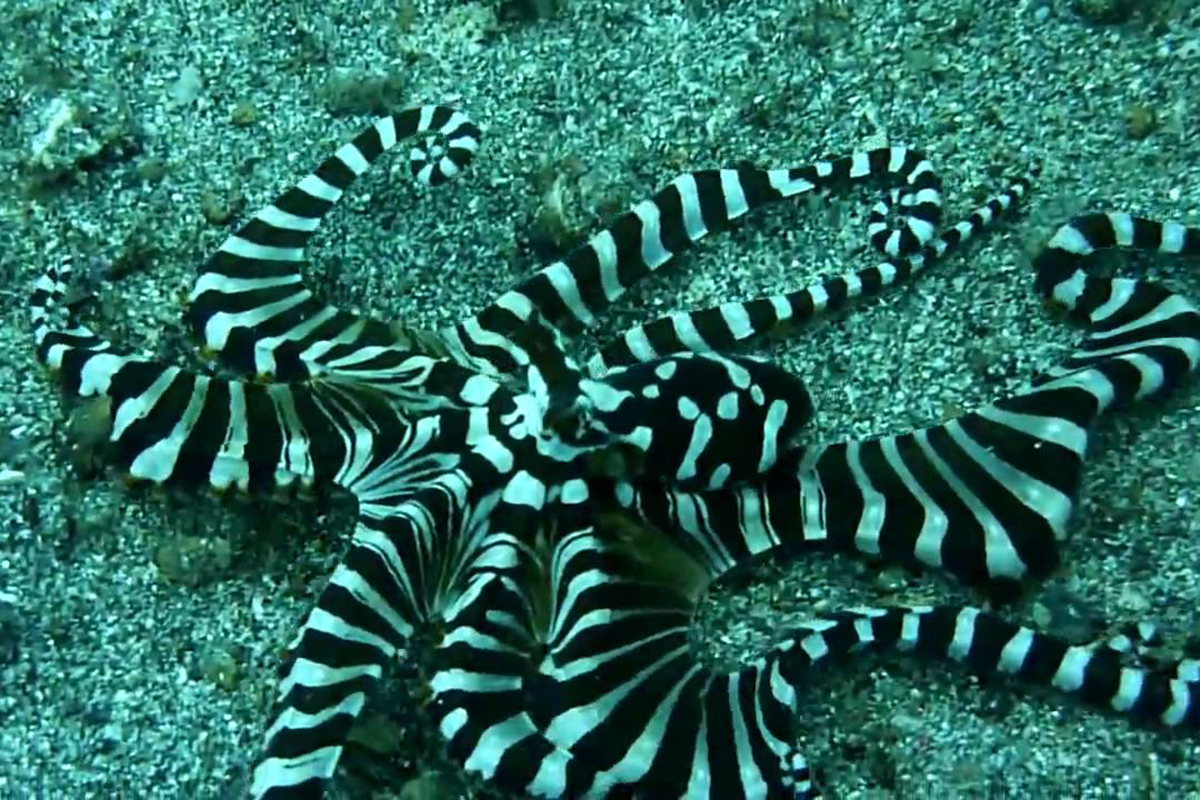 The wonderpus can be difficult to spot but if you’re diving in the morning around sun-up or in the evening around dusk, you might get lucky. They are regularly found by divers in the Lembeh Strait, a regular dive area for Gangga Divers at Gangga Island Resort & Spa.

Muck diving in this area often turns up a wonderpus and even if you don’t see one, there are endless other marine species to look for.

Have you seen videos of the amazing wonderpus? Perhaps you weren’t sure about the differences between the wonderpus and mimic octopus until now? Now it’s time to book a trip to dive in North Sulawesi so you can put your newly learned knowledge to the test!

If you have any questions or comments about the wonderpus, please don’t hesitate to leave us a message below.