As you may know, there are only 7 species of sea turtles in the entire world. Incredibly 6 of those species are found in the waters around Indonesia and at least 5 are regularly seen around Manado.

Diving with sea turtles is a joyful experience that you will never get tired of. Their sheer size and grace in the water makes sea turtles the perfect dive companions. Watching them dive and glide through the water really is a sight to behold. But sea turtles are much more than just beautiful to see. They are also very important in the marine habitats of the region. Let’s dive into the importance of Sea Turtles in North Sulawesi. Sea turtles are critical to keeping a balance to biodiversity and healthy marine ecosystems. Green sea turtles, which are the most plentiful in North Sulawesi, are one of a very small number of large herbivores that eat seagrass. Their prolific grazing both increases the nutrient content and productivity of seagrass blades, which maintain healthy seagrass beds. All species of sea turtles are found to have symbiotic relationships with numerous other marine species. This is another reason they are so important to marine ecosystems. For example, barnacles, algae and other epibionts that live on Sea Turtles are an important food source for many small fish and shrimp that live on the reef. The cleaning stations that sea turtles stop at to clean off their hangers-on also feed larger species like wrasse and remoras. Although sea turtle numbers in North Sulawesi might seem quite healthy, all 6 of the species found in Indonesia are on the IUCN Red List of Threatened Species. There are a number of reasons for their decline, including commercial fishing, illegal poaching, coastal development, and ocean pollution.

This is why it is so important for resorts like Gangga Island Resort & Spa to do their part to ensure safe hatching habitats for the sea turtles populations in the area. Sea turtles only breed every 2 to 4 years so giving every hatchling the best chance at survival is essential. Gangga Island is lucky to have quiet beaches where turtles come to lay their eggs a number of times each year. If you are very lucky you might be staying when a mother comes to lay her eggs or when the hatchlings emerge and make their way to the sea. 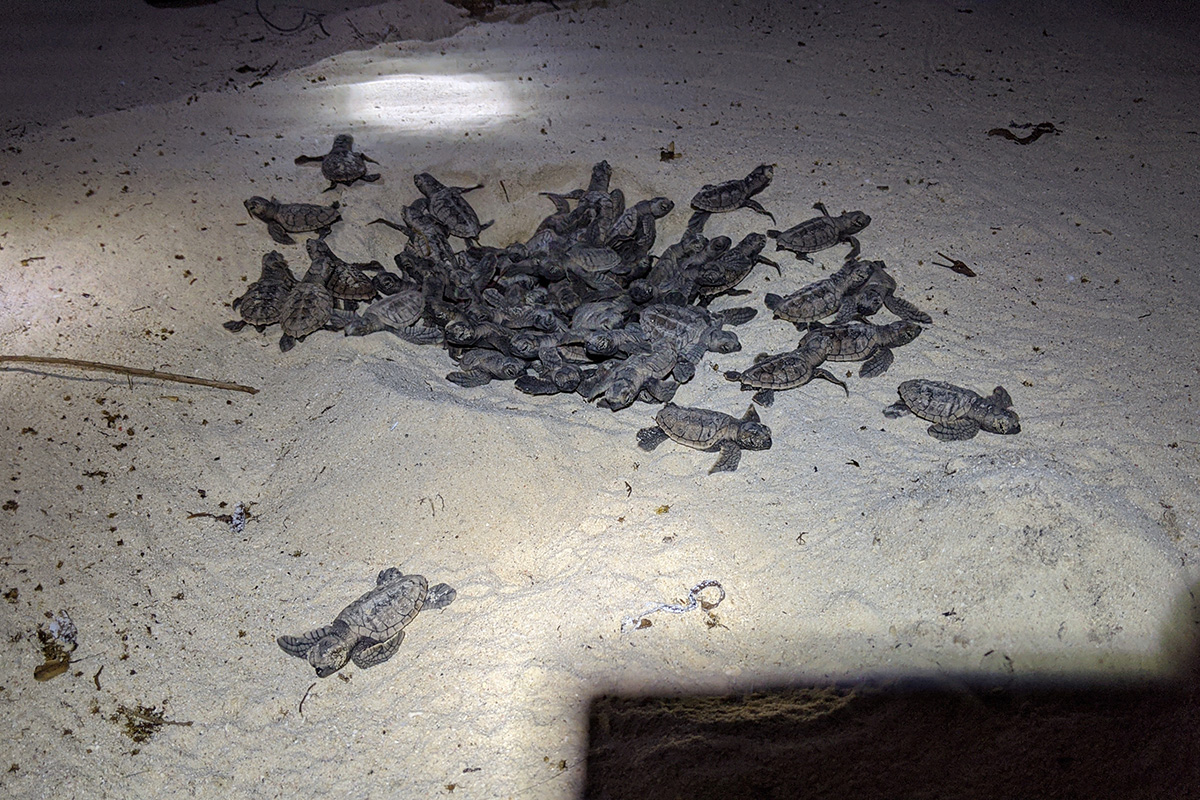 Have you been lucky enough to dive with sea turtles in the past? We’d love to hear about your experiences in the comments box below. Or perhaps it is something you have on your bucket list. If it is, North Sulawesi is the ideal place to go.